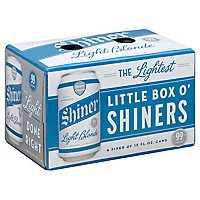 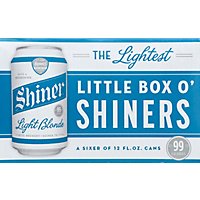 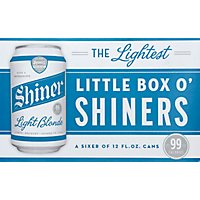 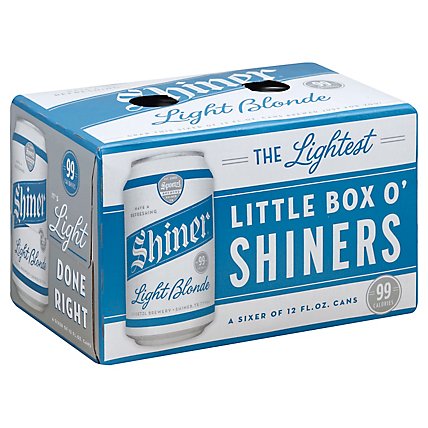 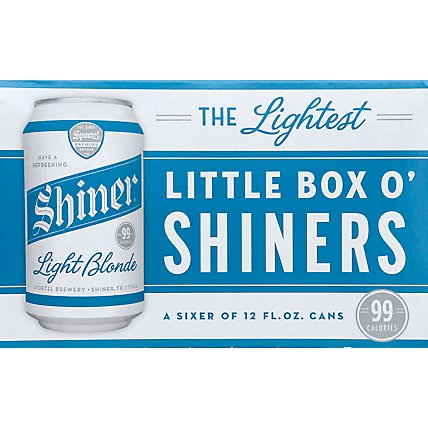 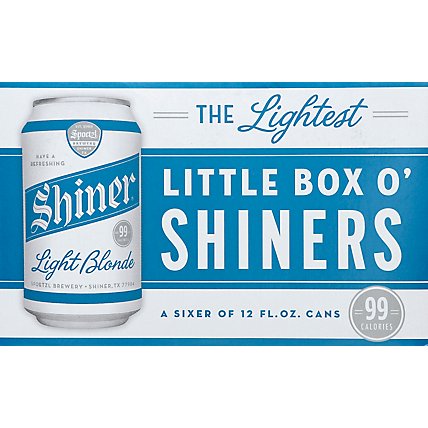 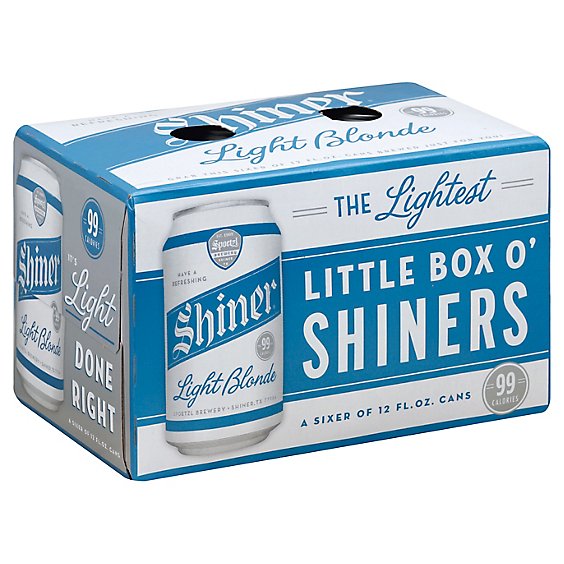 Have a refreshing Shiner. Est 1909. 99 calories. Grab this sixer of 12 fl oz cans brewed just for you! The lightest little box o' shiners. It's light done right. Avg. Analysis Per 12 Fl Oz: Calories 99; Carbohydrates: 3.8 g; Protein: 7 g; Fat: 0 g. Shiner Cans Are Great For: Tubing, Camping, Pyramids, Crushing, Waterholes, Drinking. Aluminum recycles. This carton recycles. Precious cargo. Dropping beer brings about sadness. Kosmos Spoetzl and His Little Brewery: The Little Brewery was established in Shiner, Texas, in 1909 by German and Czech immigrant farmers eager to satisfy their thirst for the old-world brews of their homelands. In 1914, they hired Bavarian brewmaster Kosmos Spoetzl, whose recipes, expertise and passion from brewing excellence served as the basis of Shiner's first official beer, known today as Shiner Premium. In March 1915, Kosmos purchased the Shiner Brewery and thus began his 35-year stewardship. During that time, the brewery remained in operation throughout prohibition (1920-1933) by making ice and near beer, and later went on to enjoy steady growth and prosperity as Shiner Beers became a local favorite. In the late 1940s, Kosmos oversaw an addition to the brewery that introduced the distinctive white/brick facade that defines the building today. In tribute to our original brewmaster, the home of Shine Beers is still known as the K. Spoetzl Brewery. Every drop of Shiner is sill brewed and bottled in Shiner. We continue to handcraft beer with the same pride Kosmos Spoetzl put into every bottle over a century ago. We invite you to visit us in Shiner to see for yourself - we'll save a cold one for you. www.Shiner.com. Every drop of Shiner is brewed in Shiner, Texas 77984.

Contains: Government Warning: (1) According to the Surgeon General, women should not drink alcoholic beverages during pregnancy because of the risk of birth defects. (2) Consumption of alcoholic beverages impairs your ability to drive a car or operate machinery and may cause health problems.

Already have an account? Sign in
Welcome We’ll need to set up your preferences to get you started with your first Schedule & Save order.
Continue
Something went wrong Sorry for the inconvenience. Please try again
Scheduled!
We will send you notification through email when your order is in process. Click on Manage to visit your Manage Schedule & Save page for more details.
Continue Shopping